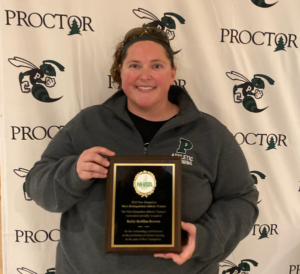 The 2022 NHATA Most Distinguished Athletic Trainer award winner is Kelly Griffin-Brown.  Kelly is a long serving member of the NHATA and is the head athletic trainer at Proctor Academy.  In addtiona to these responsibilities Kelly serves as a Sports Medince Concepters instructor.

Kelly in the words of her nominators.

mentors students at Proctor Academy who have an interest in studying sports medicine in college, serves as an effective mentor and preceptor to athletic training students and is an important contributor to the group of athletic trainers of Lakes Region Athletic League schools, frequently organizing training and practice sessions to help athletic trainers prepare for traumatic situations that may occur during athletic contests.

Senator Gannon from his nominators:

“Senator Gannon introduced and served as the prime sponsor for SB148, Part III, which included provisions to establish comprehensive emergency action plans for sports related injuries in the scholastic arena. This important legislation was adopted by the House, Senate and signed by Governor Chris Sununu on August 10, 2021.”

“New Hampshire is now a safer place for young

athletes to participate in school-sponsored activities because of Senator Gannon’s commitment to pass SB 148, Part III.”

“…the bill mandates 5 major areas of athlete health and safety.

singular bill for athlete safety. This one bill put New Hampshire within the small company of a few other states that have prioritized athlete safety to this degree.”